Harrisburg has been cultivating some great public art in the past few years. This is Part One of a series of posts that will share the very best of it! Many of the newer examples are from the 2017 Sprocket Mural Works Project (18 Murals in 10 Days!) in 2017. Plans are in the works for another Harrisburg Mural Project in 2019. I can’t wait to see the new additions next year!

First up, is the mural on the side of Underground Bicycle at 1519 North Third Street. This was painted by the duo of Key Detail & Yu-Baba and was part of the the Sprocket Works Project. One of my personal favorites (also a Sprocket Works Project Mural) was created by world-renowned artist Vera Primavera and is  located at 213 Locust Street. I’ve tried to ride “Bruiser The Cruiser” here several times to get a shot of my motorcycle in front of this; but it’s generally tricky to park here. I happened to be walking by a few weekends ago and snagged this shot. Be warned if you visit on a hot day: this parking lot is a popular place for people enjoying the nightlife to ….. ummm, “relieve” themselves and when temperatures rise … it’s not the best olfactory experience that you’ll ever have. Aron Rook’s lovely mural at 19 South Third Street predates the Sprocket Mural Works Festival but was affiliated with the organization. This stunner by Crystal Wagner graces the side of an apartment building at North Third and Boas Streets. Craig Welsh’s mural is on the northern side of Sayford Market at 1307 North Third Street.  I previously posted the mural on the south side by Ralphie Seguinot (a.k.a. SR81) on the southern side of the market. See it here.

Look! There's A Bear On The Roof!
"Harvest Time in the 1920s" mural
Frog Capitol of the World! 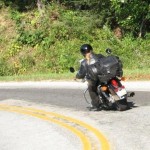 3 thoughts on “Street Art In Harrisburg”